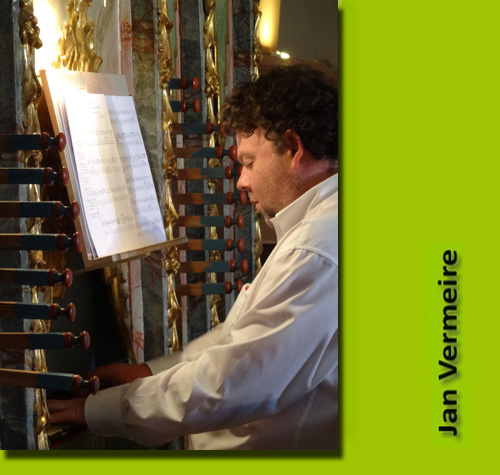 Jan Vermeire (° May 1968) received his early musical training on the organ with Robert Deleersnyder at the Music Academy of Veurne. He continued studying at the Royal Conservatoire in Brussels with Professor Hubert Schoonbroodt. He was coached several years by the Viennese musical pedagogue Hedda Szamosi. He also studied Choir Direction with Professor Florian Heyerick at the Royal Conservatoire in Ghent.

Jan Vermeire is the organist of the new Lapon organ (2011) in the modernist Church of Our Lady of the Dunes (The Cathedral of Light) in Koksijde. He is often invited as a recitalist at prestigious organ festivals, last years he has been playing concerts in Belgium, France, Germany, the Netherlands, Portugal, Spain, Italy, Poland, the United Kingdom, Switzerland, Australia (Sydney and Melbourne) and the United States of America (recitals in New York, Washington DC, Shenandoah University and on the famous organ of the Mormon Tabernacle in salt Lake City)

Jan Vermeire is the artistic director of the International Organ Festival Koksijde and Veurne-Nieuwpoort, and also of the Festival International d'Orgue en Flandre (France).

He has made several recordings on historical organs in Flanders and was broadcasted in a series on Dutch Radio 4. In 2008 he recorded a disc on the marvellous Woehl organ in Cuxhaven (Germany), together with the Ottone Brass Quintet, in 2009 on the historic Jacobus Van Eynde organ (1716) in Ver-Assebroek (Bruges). In 2012 a new disc was released with Johann Sebastian Bach's organ works on the Jürgen Ahrend organ of Porrentruy in Switzerland. In 2016 he was involved in a project by the German classical music label Fagott-Orgelverlag to make recordings of the complete works of Samuel Scheidt.